It’s been a while since I made Alisha a new dish. I’ve been rotating between salmon porridge and beef porridge for quite some time and I figured by now she would’ve been pretty bored with her porridges. UUuu! That reminds me I’ve yet to share with you my beef porridge recipe 😀 will do that later, it smells so good you’ll want to gobble it up yourself.. hehehe…

Anyway, I got the urge to try out something new for Alisha the other day. Inspired by one of Annabel Karmel’s recipes, I set out at lunchtime to get the ingredients to make her Pumpkin Risotto!

Here’s what you need :

First, melt half portion of the butter in your pot and sauté the onions until they’re soft.

Then add in the rice and stir it around a bit until it’s well coated with the butter/sautéed onions.

Pour in the boiling water, cover and cook for around 5 – 8 minutes on high heat.

After that, add in your pumpkins, stir and cover. Reduce the heat (to maybe low-medium) and cook until all water has been absorbed. If the water looks like it’s drying up and you feel that the rice is still too hard for your baby so chew on, add another half cup of boiling water (and so on) until you’re satisfied.

Note : Don’t forget to stir occasionally or you’ll end up with a crusty lining at the bottom of your pot!Meanwhile, in a separate pan, melt the rest of the butter and add in the tomatoes. Sauté the tomatoes until they’re kinda mushy (about 2-3 minutes) then stir in the cheese till it has melted and turn off the heat.

Note : Don’t forget to keep check on your pumpkin rice!

Once your rice is done (meaning you’re happy with how soft it is), turn off the heat and stir in the tomato-cheese mix.

Voila! Your Pumpkin Risotto is ready for baby!! 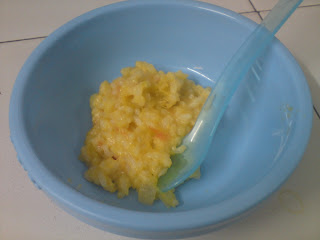 This recipe is enough for a few portions so you can freeze the leftovers for consumption over the next 2 days.

Enjoy! 😀
Note : Be sure baby drinks lots of water after this meal to avoid constipation!