A group of us girls, along with my husband and his bestfriend were all geared up for the event. We left home at 5.30am to be able to park closer to the venue as roads were closed for the race at 7am.

Once, there, I was seriously amazed at the massive turnout! Thousands of people up at the crack of dawn to RUN! Hhahhahaha, I never knew Malaysians to be such race enthusiasts. 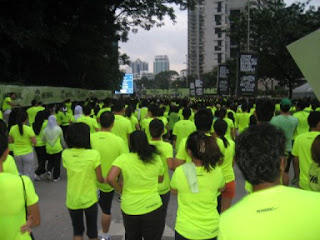 Ok, so here’s the thing, prior to the race day, I have not had a single training session at all. At. All. The last time I jogged was in 2001. So was I a little freaked out to run five kilometers? You bet! Hahahahah!! But breathing in the fresh morning air that day, and looking at all the people in fluorescent yellow Nike tees, I was all pumped up and ready y’all!!! WOOT!! Of course the fact that my husband bought me a new pair of Nike running shoes, a pair of running pants and the cutest pair of socks added to the excitement *grin* 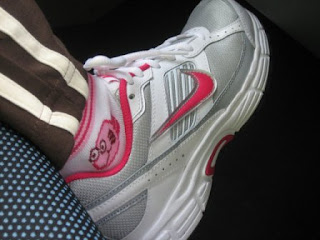 Stretchin’ before the race!

The 1st kilometer was a bit of a toughie, maklumlah takde training langsung kan, stretching pun setakan jalan from the carpark to the starting venue. Slightly further from the 1km mark, we passed by a dude who had collapsed by the side of the road. A small crowd of people had gathered around him and by the way his body was flopping, it looked like he was having seizures. Not sure what happened to him, but I hope he got the help he needed. 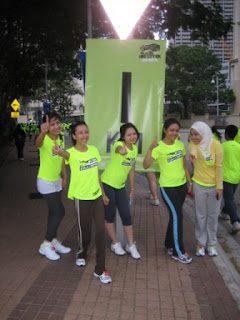 Moving further into the run, I got my momentum and pretty much jogged an even pace till the end 😀 Walking every now and then to catch my breath. The husband joined me about 3km into the race, he was expecting me to just walk till the end so he got quite a surprise when his tiny wifey actually made full use of her running shoes. Oh, in the midst of running towards the finishing line, we also managed to stop to take some pictures… hehehe…

And we’re off again! 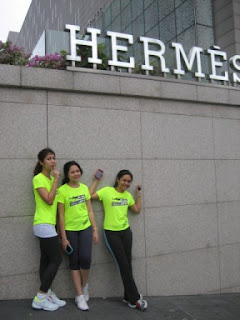 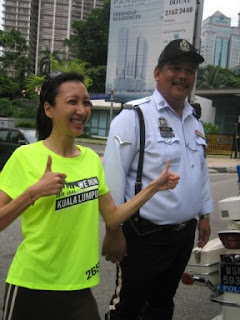 With our trusted po-po 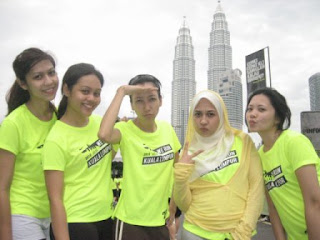 We run KL yo

In the end, I managed to finish my five kilometers in less than an hour so kudos to me!!

Did any of you Doodlers take part in the Nike run?