I’ve been feeling downhearted for the past few days. Totally depressed due to reasons I’d rather keep to myself for the time being. It has almost come to a point where I couldn’t care less anymore about what happens next with regards to this particular issue that’s making me feel this way.

So what’s a girl to do when she feels this melancholy? I do what I do best. I shop. Yes, boohoo says my pocket but when I’m as sad as I am feeling, retail therapy works best.

What did I end up with? A marching band jacket from Velvet Ribbon, a MiuMiu designed handbag from *pumpkin* and last but not least, a vintage Salvatore Ferragamo leather clutch that’s oh so classy and elegant. I nearly ended up with a pair of Ferragamo shoes as well but I thought it would be a bit overdoing it, therefore I just took the clutch. 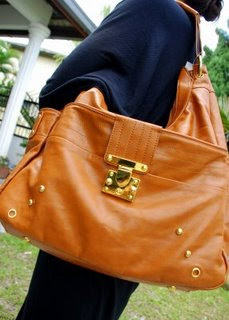 So now I’m as happy as a clam!! I never knew the amount of satisfaction you’d feel after buying designer, ahahahahah!! Like my boss said, once you buy ferragamo, you won’t look at Guess no mo’. LOL!

It still doesn’t fix whatever it was that made me blue in the first place but at least I have a great distraction. Owh, and also, I have a new hairdo that has me fussing over every day and night. So yay to me! Farewell melancholy!!

On another note, yesterday was my husband’s first day at his new workplace. He left super early to beat traffic and came back rather late (as compared to previous working hours lah). Poor thing was so tired, we barely chatted much before he fell asleep at 9pm only to wake up at 6.30am the next morning to get ready for another day’s work.

Hence why I didn’t bother him much with whatever it was I was feeling. I suppose he knew and felt my low key aura but I felt it wasn’t worth much fuss as there wasn’t anything he could do to fix it. Besides, he has his own jitters to worry about. He’s been real sweet though, he’s called more than thrice today just to say hello. 🙂

Anyway, now I’m almost broke, which is what shopping does to you so it’s to be expected. Can’t wait for payday!! Wheee!!!

19/11 Update : Went out to look for birthday presents yesterday night. Ended up with a chunky necklace for myself to which the husband said “Udah udah le retail therapy tuu…” LOL!

Energizer is gonna give a refund!!
Police outrider called me stupid: Officer IDENTIFIED
Happy Birthday to Me!
Previous Post An ocean of wonders
Next Post On being a kid