I stumbled upon the most hilarious but well-thought-of children’s book on Amazon today.

It’s called “I am a Booger, treat me with respect” 😀

Even the title makes you want to giggle! 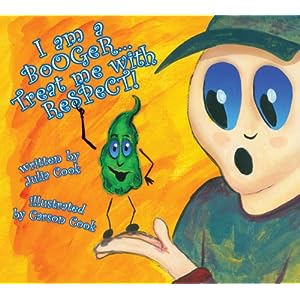 Below is the book description, courtesy of Amazon :

Boogie the booger teaches little pickers and flickers the healthy way to blow their nose using a booger ghost. Boogie knows that most people think that he is gross, and some people even call him a snot. But he does not feel bad because he does great things! He keeps us from getting sick! He is a true defender and just asking for a little respect.
I wonder if it’s available at Borders or MPH…hhmmm…
Which brings me to another question.. why do kids like to pick and eat their own snots? hahahahah!!