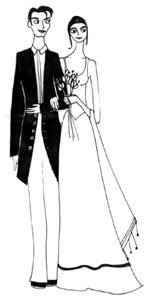 In the midst excitement about my engagement and wedding, many times have I stopped to think about how things would be after all of the celebrations is over. I do realize that sometimes young people tend to look at marriage from a fairytale point of view. Instead of thinking with our heads, we think more with our hearts. I stumbled upon something written by a Ms Marie Hughes, who shared her thoughts and experience about being married at a young age. Nothing too elaborate, but I do believe she has managed to put her finger on certain things that young couples tend to look over with glazed eyes.

Getting Married Young : Be Prepared for Your Lives to Change

While it may seem, and on some levels be, enchantingly romantic to marry your high school sweetheart, there are sacrifices that people make when they decide to get married young. My husband and I started dating when I was a freshman in high school – I was fourteen years old! Just under a decade later, I am a twenty-three year old wife, and my husband a twenty-four year old husband. We’ve been married just under a year, so I suppose our official classification is no longer “newlyweds.” Nope. Now we’re just married folks. Don’t get me wrong; I honestly mean it when I say that my husband and I are more deeply in love than ever, and our bond really has only been strengthened since we tied the know. However, there are several external factors about being a young married person that make it trying at times.

Face reality: the divorce rate in this country is sky-high, and about half of all marriages do not last “until death do us part.” Make sure that you aren’t jumping into a commitment that you aren’t ready to make. Young couples are at an increased risk for marital problems and divorce. If you are getting married in your twenties, be prepared to live on a tight budget (unless you are quite lucky). Financial problems are the number one cause of disputes between spouses, and since young people are just learning how to navigate in the financial world, it’s not surprising that young married couples often quarrel over money matters. Couples that marry in their thirties and forties generally have a more secure grip on their finances and they have become accustomed to budgeting and saving.

One of the main things to expect if you get married young is that your friendships are going to be strained. Like it or not, if you are the only married couple in your group of friends, you just aren’t going to share the same connection with your buds anymore. Even if your friends are in committed relationships, there’s still a strange difference between married and non-married friends. For me, the changes that I have seen in my friendships have been blatant. Pretty much all of my female friends are not only unmarried, but completely single – and loving it. I feel like an outsider. They’re on spring break, and I’m at a family barbecue with the in-laws. We just have such different lives. It’s hard to find common ground. It’s not that you have to end your friendships, but if you’re getting married young, you should be prepared for the relationship dynamics to change.

You can also expect that you are going to change yourself. You will feel like you have taken on adulthood even though you are still unsure of your future. Even though you and your husband have committed to sharing a future together, whatever that future may bring, it’s still pretty scary when you actually do it. You have to understand that just because you two have gotten married, you are still in some very formative years in your lives. Be prepared to grow and change together, and be ready and open to talking about the changes as you experience them.