For the first time in my entire 25 years of living I made something from scratch. Chocolate sheet cake to be exact and I made it ALL BY MYSELF! *hins*hins*

As you can tell from my previous post, I was down in the dumps, definitely no rainbows in my skies. So I chatted with the Babester, and we somehow ended up in Ikea. Me looking for stuff to start my baking adventure, and her, simply buying stuff at random.

We both went to the car with a plant each (don’t ask why) and some other unintentional stuff. Wait, wait, the Babester got over excited and bought two pots. I have proof. Look at her all smiley-smiley with her orchid and ginseng pots. 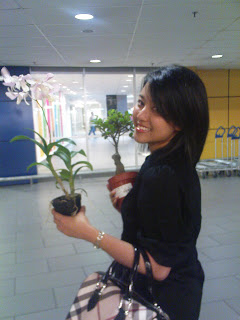 I did manage to buy myself a good set of measuring spoons and other little baking essentials so that’s a plus point there. After which, we got into the car, and drove to The Curve.

Yes, that’s right ladies and gentlemen, we DROVE across to the other mall which was barely 5 minutes walk. If you have a problem with that, go see a psychiatrist. You’re obsessed.

Anyway, we went to Borders where the Babester bought a few magazines, then we went off to Tesco to buy cocoa powder and all that jazz because I decided that I wanted to make chocolate cake. We found most of the stuff we wanted in Tesco, but then couldn’t find around three other ingredients.

Cold Storage was our best bet, and where was it? Of course, it’s at Ikano. So we walked back to the carpark, and initially wanted to walk to Ikano via the connecting bridge. But we DROVE again within the carpark, parked closest possible to the bridge, and only then proceeded to walk towards Ikano.

Now here’s one of the best parts of today. While walking up the stairs from the car park to the Street in the Curve, my eyes fell upon this shivering skinny ball of parse fur by the side of the stairs. It was a lost kitten and God knows how he wound up at The Curve. He was obviously hungry and scared and looked absolutely pitiful. The Babester somehow managed to convince me to take the kitten home and now I have another kitty under my roof.

I wanted to call the lil’ kitty The Curve, but Babes came up with something better. Our kitten is now known as Curveball. LOL. Curveball the rescued kitty.

So we got home fed Curveball, and after which, I made chocolate cake 😀 I’ll post pictures of Curveball later when he’s not so frightened. Right now he even jumps when he hears us breathe. Oh, and he’s also absolutely in love with the small rug I laid down for him. I don’t think he’s ever slept on anything soft in his little life. Poor thing.

We’re in a contest!!
Happy birthday to me :)
Walking skeleton on a mission