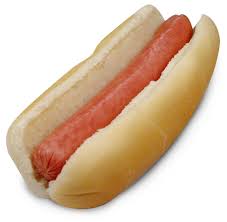 When I was in high school, there was this man who sold steamed hot dogs from the back of his Iswara. Every day after school was over, kids would line up behind his car to buy the super yummy coney dogs, steamed hot dogs with mustard and chilli, sometimes just the coney fillings in pita bread. All good stuff!
Apart from selling behind my school after school hours, he also sells at this playground in front of a little kindergarten where I worked part time. One day, as I was teaching the kids their ABCs, the man who sold the hotdogs came into the kindy. He wanted to deliver some orders the teachers made. As he made way out, the 3 and 4 year olds in my class saw him leave. Being big fans, the kids got super excited.
Without warning, at the top of their lungs they yelled, “BYYYEEEE ABANG HOT DOG STIIIIMMMM!!!”
LOL! I felt it was just sooo wrong, but that’s the beauty with kids kan? They’re just so innocent and pure 😀

How to scare a tele-marketer