Taken from The Star

KUALA LUMPUR: The Avril Lavigne concert in Stadium Merdeka, here, on Aug 29 has been cancelled.

Unity, Culture, Arts and Heritage Minister Shafie Apdal said that the concert falls during the nation’s independence period and was not a suitable time to hold such a concert.

There are a lot of events on Aug 29 and the Ministry does not want the independence and the near Ramadan month to be filled with such pop and rock culture, he said.

“As the Minister of Unity, Culture, Arts and Heritage, we should be instilling good culture in the young but here we are allowing other parties to organise things,” he said Wednesday after launching the IDeAS for enhancing Integrity book.

Moreover, the organisers were promoting the event even before they got approval from the relevant agencies, he said.

“All organisers, local and foreign, should adhere to the rules and regulations before promoting the concert and selling tickets to the public,” he said, adding that Lavigne’s organisers should have sought advice from the Kuala Lumpur City Council or the Ministry.

Asked if he knew why they had promoted the concert before it was approved, he said he did not know.

Asked if the Ministry’s decision was in response to PAS Youth’s call for cancellation, he said “no.”

In another news I read, the PAS Youth’s apparently called for the concert to be cancelled because Avril Lavigne was deemed to be “OVERLY SEXY” and that she might influence the minds of the Muslim youth.

LIKE HELLOOOOO!!! Have you all never heard of television?!? How about MTV? Channel-E?
THE FREAKIN’ INTERNET?!?!?!

God, sometimes I wish these people would just stop talking like they represent the whole Muslim youth society here in Malaysia. What crap heads.

Now if she was to get up on stage wearing a hot pink bikini and jumping up and down with a guitar while her balloons bounce up and down, then yes, I agree that they should cancel her concert. 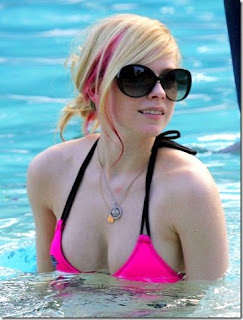 But check out what she usually wears during her concerts.

Yes. Jeans and tshirt. Please tell me how this is “overly sexy”.

Don’t get me wrong, I’m not obsessed with Avril Lavigne or anything like that, I just dislike the whole idea that everytime an international artist plans to hold a concert here, some stupid “I am holier than thou” young politician wannabe will scream and shout and throw stupid tantrums in front of the media saying “NO NO NO!!! TOO SEXY!! I WONT ALLOW IT!!”

My heart goes out to all of you who have bought tickets. Go sue the organizer.